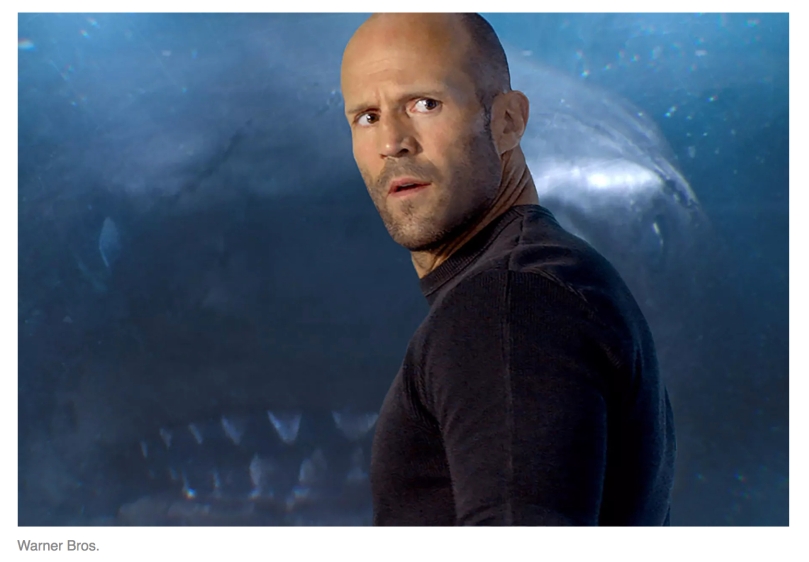 Straight up I have to own that I LOVE big shark movies. Or big croc movies for that matter. Deep Blue Sea, and Lake Placid are two of my all-time favourites. They’re on frequent re-watch in my house, and I’m not going to apologise for that. They are gold. And I’m just going to say it, I’ve seen pretty much every SyFy shark movie to assault our screens, from Two-Headed Shark Attack, to Ghost Shark, to the epicness of the Sharknado series. I can’t help it. They are stupid and fun (mostly). So, it’s no wonder The Meg, was on my “must see IMMEDIATELY” list.

There’s no denying, The Meg is seriously derivative. It’s a little bit of all of the above mixed with a decent helping of Jaws. The amount of times I wanted to yell out, “HAVE THEY NOT SEEN JAWS?” Well…it was a lot. GET OFF THE BACK OF THE OPEN BOAT, PEOPLE, THERE’S A MASSIVE SHARK OUT THERE. Guh. (Please watch some movies, movie characters). There are gobsmackingly outrageous (yet totally epic) heroics, and some genuinely good scares. I can’t say there were many surprises, all the plot twists, if that’s what you’d call them, you could see coming at you like the Meg itself. But it’s big, and it’s dumb, and it’s wholly enjoyable. A solid B-grade schlock horror flick, with decent effects, and enough tension to keep me sitting forward in my seat. I had a pretty good time watching it.

The Meg starts with a rescue mission gone wrong. Jason Statham’s character, Jonas Taylor, makes a tough choice, lives are lost, and he pays for it with his career. Flash forward five years, and Jonas is now the sole hope (of course he is), for rescuing a bunch of scientists stuck at the very, (very, very, very), bottom of the ocean in a tiny sub, after they were attacked by something rather large, the same something rather large, coincidentally, that made Jonas’ original mission go awry, and which no one believed him about. Dun dun dun! It’s time for Jonas to pop on his hero pants, confront his fears, and discover the Megalodon of his nightmares!

I was wracking my brains trying to remember what I’d seen that had Jason Statham in it. I’d figured I’d seen a few of his movies, the hits like Lock, Stock and Two Smoking Barrels, I remembered he was hilarious in Spy, and as I was enjoying the hell out of watching him fight a ginormous prehistoric shark, I was thinking, “I really should watch more of this guy’s movies”, only to come home and look up his filmography and realise, oh, I’ve seen a bunch! Who knew! It was Statham who holds The Meg together, he’s pretty close to perfect as the tortured, reluctant hero, all deep sighs, furrowed brow, and cuteness with the pre-requisite, sassy kid. There’s a smattering of romance shoe-horned in between his and Bingbing Li’s character, which manages to give the audience an amusing, and not entirely unpleasant, Statham shirt off scene. Though for someone who’d been sitting around Thailand drinking beer for a few years, he was totally ripped! Must have been low-carb…

Once the formerly, thought to be extinct, Megalodon manages to escape the bottom of the ocean and make its way into open water, our ragtag team of hero, scientists and billionaire jump on a boat to hunt it down. Let the good times roll! Seriously, if they’d just have popped on Jaws on the way out… I mean, there are genuine lessons they could have learnt there!

There’s a pretty cool, over the top, scene with a whole crowd of people floating on inflatable rings in the sea, (Megalodon window shopping below them), complete with kid asking his mum if he can go in the water… *whispers* don’t go in…have you not seen Jaws? This scene was part of an excellent marketing campaign that positioned The Meg as a good/bad movie with its tongue firmly planted in its cheek. It lives up to that hype.

In the end, there’s enough self-aware humour and jump scares to make this an enjoyable ride. The Meg is certainly not high art, or the best in its genre, but it’s a pretty good time with a talented, diverse cast. The shark is big, the action is big, Statham’s abs are ridiculously big, just grab the popcorn and let it wash over you, like the gaseous mist from which the Meg emerges.

One thought on “The Meg – Movie Review”